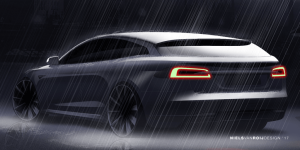 A new design has been revealed for the Model S that turns it into a real ‘Shooting Brake’ and is said to go on sale from March 2018. The edition is strictly limited.

Designed by Dutch Niels van Roij and his team in London, the electric car is due to be produced by RemetzCar at its coachbuilding facility just outside Amsterdam. Remetz had recently made the news when they converted a Tesla into a hearse.

This time round, the design is for the living and designer Roij stretched the roofline and thus created more of an estate-style rear end and potentially a bigger boot. Extra chrome trim has been added to the sides of the body but the drive system will remain the same as in any Tesla Model S.

Twenty examples of the revamped Tesla are due to be produced. A starting price has yet to be disclosed.

Audi Sports to electrify from 2020

Tech details ahead of the Nio ES8 debut in China