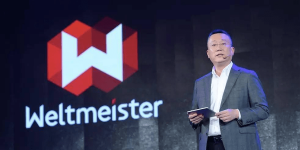 The Chinese EV start-up has presented the design of its first upcoming model in Shanghai and announced to use its company name ‘Weltmeister’ (German for world champion) as its brand.

The electric SUV model EX5 shall hit the stores in the second half of 2018 for less than 300,000 yuan (approximately 38,500 euros). At the unveiling event in Shanghai, the company also showed the Weltmeister logo for the first time.

Two other EVs are set to launch before 2020 and WM Motor aims to sell 100,000 cars a year with within 3-4 years of the planned 2018 launch, Freeman Shen, WM Motor’s founder told Reuters. All their electric cars will be made at the company’s plant in Wenzhou, that will then run on its capacity limit if WM Motor manages to reach its sales targets.