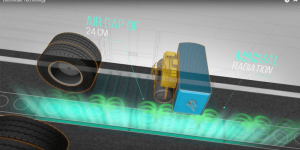 ElectRoad has developed a system with which vehicles can recharge as they drive via copper coils inlaid in the road (we reported). Its target market had been electric bus makers and with Dan Bus, a match may be made.

The bus maker from Tel Aviv wants to invest 2.2 million dollars but that depends whether a merger of ElectRoad and Biomedix Incubator Limited will be completed or not. The latter has already reached out to Dan Bus for a cooperation.

In a statement, ElectRoad explains how it wants to avoid the “Better Place obstacles” by laying its charger coils under the public transportation lanes and power only buses traveling in these lanes daily. In this way, ElectroRoad hopes to penetrate the market gradually and only needs to persuade a small number of decision-makers.

The investment by Dan and the agreement between the companies indicates that public transportation companies are indeed interested in the technology, ElectRoad said.

Fraunhofer IT expert warns of security flaw in charge cards