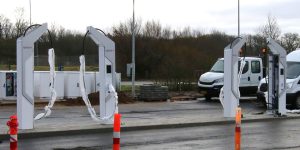 The future of charging is becoming a reality at Danish Aabenraa, where the first charging facility of the high-power charging network IONITY is being installed at present. We paid the promising site next to a gas station a visit.

It is already late in the evening, when we pull up on site with our Porsche PHEV – we are currently testing the latest Panamera 4 E-Hybrid – where we believed the HPC charge park to be. But when we finally drive into the Circle K station, the chain that is Ionity’s partner for locations in Scandinavia, we cannot see any HPC fast chargers. Instead we find ourselves faced with a 50 kW station from E.On.

But at a second glance, it becomes clear what is happening in Aabenraa, directly on the Danish E45 motorway: At the edge of the facility, cables from six charging stations protrude from the ground. Arranged in a row they are passable from both sides. A few metres further in, we discover the finished transformer station. A wheel loader from the construction company stands next to it, the tracks are still fresh. Additional shafts and connectors reveal the facility’s cooling system.

Clearly, here in busy Aabenraa, where many motorists from Denmark, Sweden and Norway drop by, the HPC charging system with its liquid-cooled 800-volt technology by Porsche Engineering is under construction. The custom parts needed for the specific voltage level of 180 to 950 volts are unmistakably Porsche’s. We have seen such a system at a demonstrator site in Berlin before.

In Denmark, though, a trusted source tells us later, it is the IONITY network building the first DC charging park. It is to serve as demonstration and to complete the installation before the year’s end had been a must as this site will be the blueprint for all those other 400 fast charging stations that IONITY wants to have put in place across Europe by 2020.

The location in Denmark was chosen because it was comparatively easy to implement. Once it opens (a date has yet to be set), it will offer six charge points charging with 350 kW via the Combined Charging System (CCS). The Porsche Mission E will be able to recharge here once it launches in 2019.

As four us, we felt the headlights of our Porsche Panamera e-hybrid brightly illuminated the electric future of the German sports carmaker that day. Naturally, the HPC system is compatible with older systems and thus rejoices CCS vehicles with lower charging power such as 50, 80 or 150 kW. If we had been in Aabenraa just a day or two later, we would have seen Ionity’s futuristic charging stations standing tall in white rather than a construction site. However, at least a photo found its way to electrive.com already.

Webasto to present its charging solutions in the States