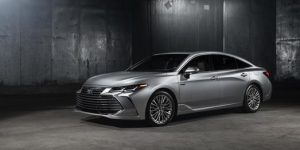 In Detroit, the Japanese carmaker took the wraps off the fifth-generation of its upper-middle class sedan. Like its predecessor, the 2019 Avalon will be available with hybrid powertrain. However, this time the HEV variant comes with an all-new system.

Thus, the upcoming model will couple a 2.5-litre engine with two electric motors – one to generate power for the system’s Nickel-Metal Hydride (Ni-MH) battery and one to support the four-cylinder engine. Due to the carmaker’s platform called Toyota New Global Architecture (TNGA), the battery pack is no longer located in the trunk, but resides under the rear passenger seat.
greencarcongress.com