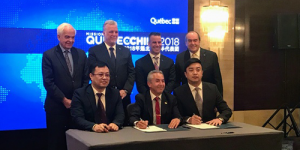 Thus, Kingpower can start producing batteries for the Chinese market based on technology developed by Hydro-Québec. According to the Canadian company, the system works particularly well in EVs as solid-state batteries provide more safety and a higher energy density than usual li-ion batteries. Together, Hydro-Québec and Kingpower will soon install a pilot assembly line.
news.hydroquebec.com