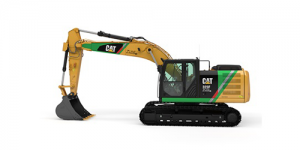 Norway’s Pon Equipment joint hands with Caterpillar to electrify their digger Cat 323F. The electric excavator is currently biting its time testing but is set to show at a fair this May.

Codenamed Z-line (for zero emission), this version of the Cat 323F is a 25 ton machine that handles itself all-electrically.
While the machine looks like a regular Cat 323F, it got green stickers that qualifies it as the eco option. It obviously got no air filter and no exhaust pad.

Inside, the entire engine has been replaced with an electric motor, controllers and heavy duty batteries. The Li-ion battery is said to be large enough for 5 – 7 hours in operation and charges quickly as there is the possibility of fast charging at a 400 or 1000V power supply.

It took the Pon engineers eleven months to electrify the heavy-duty machine during which they worked closely with Caterpillar. They made adjustments to the software and some to the excavator.

For Pon, the idea is to develop a conversion kit to replace diesel powered Cat machines with battery powered ones. In Oslo alone, construction was responsible for 30 percent of emissions in 2016. And with the blue print now made, Pon says it is possible to make similar battery-powered wheel loaders, telecom operators and more.

The Z-line machine will be shown on construction trade show in May. Until then, it will be carefully tested in the field.

Veidekke has already purchased the first machine and expects delivery of the finished electric digger this autumn.