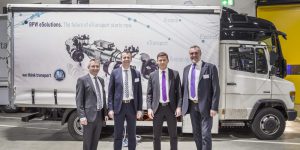 The Paul Group for utility vehicles has developed a standard conversion package for the Mercedes-Benz Vario in collaboration with BPW Bergische Achsen KG. The electrification aims at existing fleets as the Vario van has been discontinued.

Mercedes-Benz can welcome an electric member in its family, albeit one that is adopted so to speak. Bavarian Paul has teamed up with BPW Group to offer a standard conversion kit to wholly electrify the Vario van.

BPW says its electric drive and battery does not add any weight as it replaces the engine, transmission and emission control system. Overall, electrification actually makes the vehicle more agile with increased torque for example. The wheels can be activated individually and steering control for the rear axle reduces the turning circle.

While Mercedes-Benz has discontinued the Vario series, it remains in use at local authorities, the police and armed forces, as well as numerous commercial enterprises. For them, the electric conversion may enable them to move their fleets closer towards zero emissions.

Walter Pötzinger, managing director of Paul Nutzfahrzeuge GmbH, said “many authorities could ultimately be compelled to issue driving bans contrary to their own interests, given that they rank among the largest operators of diesel-powered commercial vehicle fleets. Electrification can allow their vehicles to remain in service for a much longer period. It is an economically viable option, especially since the e-drive costs less to operate and maintain than an internal combustion engine.”

Information on pricing has not been released. The presentation so far was a preview for local authorities in Vilshofen in Bavaria.

Electric trucks and utility EVs by Renault from 2019