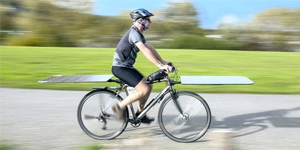 The ride share conglomerate is reportedly considering expanding into electric bicycles. In San Francisco a pilot project is to start offering the rental and sharing of ebikes in cooperation with the bike-sharing company Jump Bikes, whose 250 Pedelec electric bicycles can be rented through the Uber app.

Pricing for the deal is set at 2 dollars for the first 30 minutes, and another 1 dollar for each additional 15 minutes after that. The ebikes use the pedal assist method, which generates power through the rider, and provides power to the wheels as the rider pedals.

If the project should prove successful, plans are to double the bikes in nine months time. While Uber is using the opportunity to branch into new markets, Jump Bike CEO is more exited about the prospect of bringing the ebikes to a much larger audience, as the convenience factor of renting the bikes will greatly reduce the entry barrier to people interested in testing ebikes.