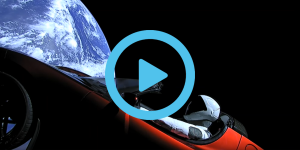 Real news first: SpaceX has mastered the art of shooting and landing rockets. Big business awaits the Falcon Heavy. Now the curious news. To prove their case, they shot a Tesla Roadster into space with an astronaut dummy on board.

Tesla CEO Elon Musk has a hand for the masses and for spectacular or at least virally successful marketing stunts. The one SpaceX pulled off though beats any other as the rocket builder shot a Tesla Roadster into space.

The electric icon got carried there via the Falcon Heavy rocket that had been carried by two side boosters that have since returned to earth. The rocket and its Roadster load however, are beyond the point of return and on their long way into deep space and ultimately Mars.

With them travels an inanimate Starman as a dummy EV driver. Its radio is said to blur a Bowie soundtrack only that the universe’s vacuum knows no sound.

Tesla Model 3 analysed for the competitors