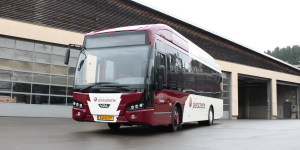 The seven Citeas LLE-99 Electric by VDL have been put into service by Voyages Emile Weber. Deployed in Bettembourg, e-buses will cover a distance of some 1,400 km a day and form the largest all-electric fleet of Luxembourg, according to a statement by VDL.

The 9.9 metre EVs will be fast-charged at every opportunity during the day and slow-charged at night and supplied with energy again via a pantograph on the roof or a plug. VDL has delivered both the electric buses and the charging stations, including installation.

For VDL, it is the first order from Luxembourg and Ard Romers, director of VDL Bus & Coach Nederland, points to similar projects in the Netherlands and some German cities, that had well prepared the bus maker.

VDL calls its Citea LLE a “lightweight champion” that weighs over 1,000 kg less than a conventional 12-metre diesel bus.