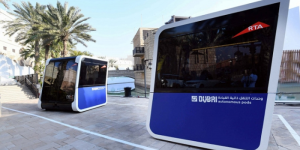 Dubai’s Roads and Transport Authority (RTA) has started testing a fleet of autonomous electric pods. Using their own dedicated lanes, the prototypes can attach and detach to and from one another to form a mini tram while in Motion. They are built for Next Future Transportation in Italy.

Dubai’s RTA has launched a testing fleet for electric and self driving pods that have been designed by U.S. firm Next Future Transportation. Each pod can carry up to ten passengers with six seats and 4 persons standing. Built in Italy, the pods have been shipped to Dubai.

There, they are to run on designated lanes and can thus also couple or detach to form a longer vehicle, even while in motion using an array of cameras and electromechanical features. RTA wants to use them on short and medium distance routes.

Their average speed is 20 kph and a pod weighs 1.5 tons and is almost square (2,87 x 2,24 metres). The battery is said to last for up to three hours while a recharge takes twice that time.

The pilot must be seen “in the context of transforming Dubai into the smartest city worldwide,” said RTA director-general and chairman of the board of executive directors Mattar Al Tayer. He added that the pdos are “also also part of RTA endeavours to provide autonomous transport through carrying out technological tests on autonomous transport means under Dubai’s climatic conditions.”

Dubai aims to make 25 percent of all journeys in the city autonomous by 2030. RTA has signed an agreement with the US-based Next Future Inc. to develop the units as part of the initial phase of Dubai Future Accelerators.