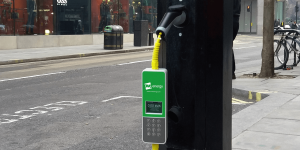 The London borough of Wandsworth has decided to install 700 charge points. The solution uses existing street furniture as the chargers will be installed in lampposts. For half of them, residents driving an electric car may apply for the chargers to be close to their homes.

The remaining 350 streetlamp chargers will be located in two so-called pilot zones Wandsworth Council has designated. No manufacturer has been named but Berlin-based Ubitricity would be a good guess, given that the company already set up its solution in London’s Chelsea and Kensington district reportedly.

In Wandsworth, the Council plans to let residents owning (or wanting to own) an electric car decide where to install the on-street charging solution. At least 350 electric vehicle charging lampposts will be on Wandsworth’s streets as a result.

The other 350 charging points will be located within two pilot zones, which is around 150 in the Thamesfield ward area near to Putney High Street, and approximately 240 in the Shaftesbury ward in Battersea. The new charging spots will have no effect on parking regulations though. This means the parking lots can be used by both electric and non-electric vehicles.

Members of the community services scrutiny committee also voted through plans for an eco-friendly electric car club to operate in the Borough, helping make Wandsworth one of the UK’s most electric-car friendly authorities, according to the Council’s announcement. Wandsworth has one of the highest take-up rates of car club membership in London, with up to 15,000 people signed up.

The number of electric vehicles registered in Wandsworth has grown from 127 at the end of 2015 to well over 400 and has been increasing by about ten per cent every three months. The Council hopes for that number to rise to around 10,000 by 2025 once the right charging infrastructure is in place.

The Council’s own fleet is gradually being replaced by electric vehicles as well. Wandsworth is also taking in part in London’s Source charging network.