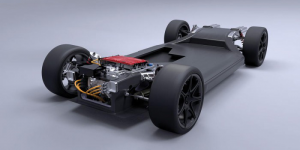 Williams Advanced Engineering has been working on a platform for lightweight electric vehicles and released extensive technical details. Features of the scalable yet compact chassis include a highly integrated battery pack design, cooling systems and mutually enforcing structures.

The British engineers had first presented the concept at the Low Carbon Vehicle Show in the UK in 2017 reportedly, and said the FW-EVX was made for lightweight electric vehicles.

Details reveal that the platform is scalable to C, C-D and D-segment vehicles and has been inspired by WAE’s experience in both the Formula One and Formula E. For a typical C-segment application for example, the FW-EVX platform weighs 955 kg including suspension, up to four motors, 4WD transmission, steering and a 350 kg battery pack holding 80 kWh.

According to Paul McNamara, Technical Director at Williams Advanced Engineering, the FW-EVX platform caters specifically to customers wanting to design a lightweight EV with a highly integrated approach. He explains that “by designing the key systems as an integral part of an aluminum/composite vehicle chassis, we have greatly reduced many of the compromises that arise when the individual elements of an EV powertrain are sourced separately, forcing the vehicle architecture to be created around stand-alone packages.”

The central battery module of the FW-EVX is designed as a low, slim, stiff honeycomb of interlocking composite boxes containing the battery cells. In the bigger picture, the high-strength battery modules become part of the vehicle structure while also enabling cooling. The packs feature an aluminum base plate that bolts directly to the thermally conductive vehicle floor that acts as a heat sink. In reverse, the side rails of the chassis also provide cooling air for the battery pack, collected through ducts at the front of the vehicle, Furthermore, the British engineers came up with inferring peak battery cell temperature to eliminate the need for individual cell temperature monitoring.

For the chassis as such, two different carbon composites, some from recycled material, come into force to reduce weight and simplify assembly. Overall, integration played a key role with the aim to improve cost, packaging and component count through tight design integration across all systems.