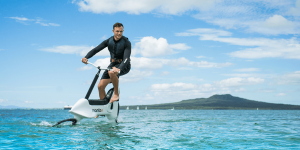 New Zealand is an island, well two, strictly speaking and so it is here the world’s first bicycle for riding the waves has been invented. The Hydrofoiler XE-1 by Manta5 is even electric.

Manta5 is a small Kiwi firm, basically inventors who had some fun to find out how to ride an electric bicycle on water. Once their Hydrofoiler XE-1 is waterborne, you got to pedal to drive a propeller that turns this e-bike into a jet ski, sort of. It rides no faster than 20 kph tops.

Still, it uses the same hydrofoil technology that lifts America’s Cup yachts out of the water, Howard-Willis’s electric motor. It’s even attracted a pre-order from the Crown Prince of Dubai who is taking three.