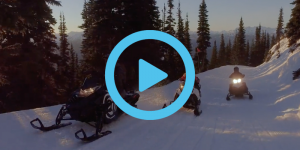 Taiga Motors’ presented its all-electric snow mobile a year ago. Based in snow-blessed Canada, a video shows the Tesla-inspired electric sledge in action.

Considerable action as the electric snowmobile slides with 80 kW at 250 Nm peak that promise an acceleration from 0 – 100 kph in three seconds. You better hold on tight for that ride!

However, the punch that it packs while accelerating is not all that distinguishes what Taiga refers to as the “first production electric snowmobile”: comprehensive software packages and dynamic integration for “over-the-air software updates”.

The snowmobile was completely redesigned from the ground up, which allowed for some significant differences between electrifying traditional models, particularly in terms of weight. By keeping the vehicles under 500 lbs while fully loaded, which includes a 15 kW battery, this vehicle remains competitive with older combustion models, without the pollution or the noise.