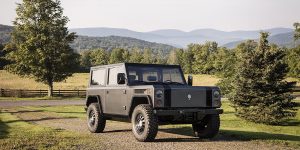 Bollinger’s electric sport and utility truck (SUT) or simply off-road EV will get a bigger battery. The U.S. startup revealed as much in their making-of the B1 video and says the 120 kWh pack will last for a min! range of 320 kilometres.

The new battery plan is a deviation from their initial announcement. When Bollinger Motors presented the B1 last year, there was talk of two battery options with 60 and 100 kWh respectively.

Already back then the range of the bigger battery pack was 320 km  (200 miles) but now Bollinger considers that their minimum range. In their making-of video, the startup also specifies the drive as a “dual-motor electric powertrain.” The trucks payload capacity is 5,000 pounds.

Still nothing has been said about pricing or production. Bollinger Motors is allegedly in talks with manufacturers and aims to start production within the next two years.