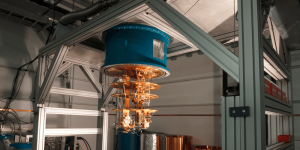 Daimler has turned to Google to use their quantum computers to understand their potential for the automotive sector. They could discover unknown battery materials and super-fast routing for example.

The cooperation agreement allows specialist teams from Daimler Group Research and IT to use quantum computers built by Google. Their 72‑qubit Bristlecone chip features the highest number of quantum bits ever used in a quantum computer, says the press release.

For Daimler, they want to apply such processing power to find new materials based on quantum chemistry, e.g. for the development of battery cells. Another use case is logistic and fleet management and advanced artificial intelligence.

Take route finding for example. A computer today checks all the exits serially, until it finds the right one. A quantum computer would search all possible routes in parallel and thus generate the correct route far more quickly. In short: forget about real-time as we know it next time you pool a ride in an autonomous cab.

Daimler is not the only carmaker turning to California to become a mobility provider. Volkswagen is also cooperating with Google and others and has been actively working to update the I.D. electronics architecture, thus enabling “complex calculations to be performed at previously inconceivable speeds.”

Here’s a little afterthought: try to get your head around the idea of Superposition. In quantum theory it is the potential presence of a particle at particular point with a certain degree of probability.