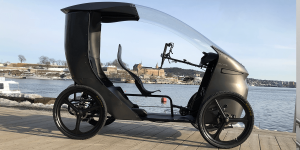 The Norwegian company CityQ is presenting a light electric vehicle of the same name in Berlin in April. The vehicle itself is a cross between an electric bike and a car. The market launch is planned for this year.

++ Kindly see all updates to this article below. ++

The LEV (Light Electric Vehicle) has four wheels, space for up to three people plus luggage and a 48-volt propulsion system, including a 250 to the 500-watt motor, allowing for a speed up to 25 km/h.

According to the manufacturer the CityQ has a range between 70 and 100 km and may even be able to stretch beyond that thanks to a built-in solar panel on the roof. The vehicle is charged via a three-pin plug.

Morten Rynning, the CityQ CEO pointed out that northern European cities cannot expect their citizens to take a bike on the many days where it is cold and rainy. To provide a reliable year-round biking experience, there has to be a guarantee that riders will remain safe and dry. As a result, the CityQ can also easily be fitted with doors if needed. With a width of 87 cm, it is not much wider than a scooter, and since it is classified as an e-bike, it does not even require owning a license to operate and can ride on bike paths.

The Norwegian manufacturer ensured that the 60 kg vehicle would be appropriate for rental and leasing services, as well as varieties of ride-sharing systems. A smartphone app has already been developed for it.

It will be presented on the 11 or 12 of April at the Electric Vehicles: Everything is Changing conference in Berlin. The first models are planned to hit the streets before the year is out at a price of around 6,000 euros.

Update 22 June 2020: Looking at the company’s plans as described above, it took the Norwegians slightly longer to bring their CityQ to market. However, they just opened the pre-orders for the mixture of car and e-bike for a deposit of 99 euros. The retail price for the CityQ is 7,450 Euros (plus VAT and freight). The company has not set a date for deliveries yet.

The spec remains mostly the same. At a top speed of 25 km/h (15.5 mph), it fits into the EU pedelec bracket and could theoretically use the cycle path. The light electric cargo vehicle is rated to carry loads of up to 300 kg and weighs 70 kilos itself.