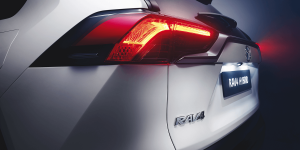 Toyota has arrived in New York bringing an upgraded RAV4 with them. It’s the hybrid’s fifth iteration and the Japanese say they wanted a bolder design. Performance data has not been given but launch is set for 2019 in Europe.

The new Toyota RAV4 line-up drops the diesel variant entirely and keeps the usual setup with a 2.5-liter gasoline-electric hybrid and ICE. The Japanese said they are both more efficient but failed to provide any detail.

The RAV4 will be built in Japan for the market in Europe where the hybrid SUV is to arrive in the first quarter of 2019. In the States, the RAV4 is to go on sale in late 2018.