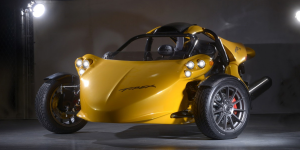 The Canadian manufacturer Campagna Motors is working on an electric version of their sports trike T-Rex. The propulsion technology comes from the electric motorcycle manufacturer Zero Motorcycles. Technical details have not been released.

The first prototype of the newly electrified T-Rex will be presented at the end of April at the Montreal Electric Vehicle Show. A further developed version of the concept will follow next summer. The T-Rex is an unorthodox design of a sports-car, that was originally unveiled in 1994 in Quebec.