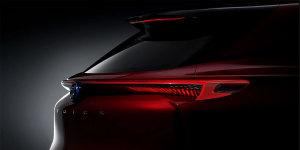 GM’s Buick is to unveil an all-electric SUV next week in China, ahead of the Beijing Auto Show. A first teaser for the Buick Enspire Concept has just been released and allows a glimpse on what’s to come but is scarce on technical details.

General Motors has asked Buick to choose China for the global launch of their new electric SUV. The Buick Enspire Concept is another extension of the label’s electric lineup with the Velite 6 having been set up as BEV and PHEV for China a week ago.

The press release reveals nothing more than calling the concept “an exploration of design and new technologies” and that it is an “application of future electric smart mobility.”

The Enspire concept is set to be unveiled in its entirety at the Buick Brand Night event in Wuzhen on April 17. It will go on display at the Beijing Auto Show after.

Smart is going all-electric in Europe too