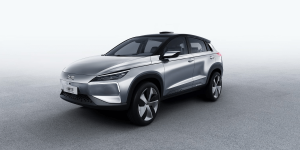 The startup, founded in 2014, managed to recently complete a round of investment totaling 350 million dollars, from the two investors Foxconn and Alibaba. The latter had purchased 10% of Xiaopeng towards the end of 2017, and is planning further investment with Ford: The plan is to explore new sales channels, such as vending machines for EVs. Foxcomm on the other hand, who is also known for their work surrounding the iPhone, is funding the former BMW-i managers Carsten Breitfeld new venture Byton and is cooperating with Evoke Motorcycles.

The G3 itself will be the serial version of the 2017 introduced Xpeng. Development also benefited from the recently expired Tesla patents, which are now available for public use. The BEV is expected to have a 300 km range. The long-term plans by the company are focused on expansion, and initial steps include the production of 100,000 vehicles per year.