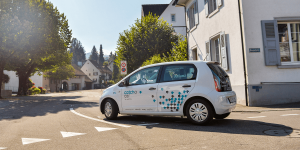 Swiss car sharing service Catch a Car has ordered its first electric models. Thirty VW e-UP are to arrive in Basel within the next few months and join the existing fleet of 120 regular Up cars. The electric version will be charged at new charging columns.

Not by the last driver though but a dedicated team of service personnel that need to catch the VW e-Up every 100 kilometres to recharge. Basel’s utility IWB took the opportunity to install eleven public charging columns.

Catch a Car operates a free floating system in Basel so that car sharers my leave their vehicle at any public parking spot. Those wanting to share an electric car may book their ride via app and will be charged per minute. Catch a Car also operates in Geneva and now has about 10,000 members.