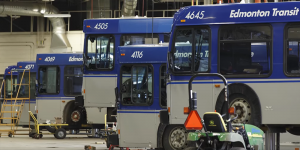 The city of Edmonton in Canada has ordered 40 electric buses with the first 5 due to arrive next year and the remaining 35 by 2020. The cost of 43 million dollars is shared by the federal and provincial governments and the City of Edmonton.

The new electric buses are set to join the Edmonton Transit System (ETS). While the procurement has yet to be finalised, the city says that the final decision has been made possible once it secured the funding. The federal government is providing $21.5 million through its public transit infrastructure fund, with both the province and the city providing another $10.8 million dollars each.

Edmonton’s mayor Don Iveson wants to see the electrification of the entire fleet within the next 10 to 20 years, and called electric buses a “big priority” for his time in office.

Just Eat gears up for green delivery fleet across UK

India’s Ola to launch 10,000 electric rickshaws in a year