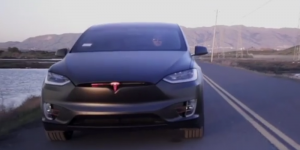 Remember the tv show Knight Rider, from before self-driving cars and talking devices were real? Now Tesla’s partner for custom vehicles, SS Customs has turned a Model X into KITT.

The original Knight Industries Two Thousand (KITT for those did not grow up watching 80s television) was a modified 1982 Pontiac Firebird. While the modern version is a completely different car, the integrated technology is just as exciting, if not more so, because it actually works now.

SS Customs is known for their customization service, which they have cooperated on with Tesla before, as they produced a camo veterans day version of their Model X and Model S. One thing we can say with at least some certainty, is that the new KITT hopefully doesn’t have that annoying know-it-all inside.

Mercedes wants to make Smart hip all over