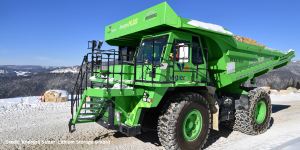 The eDumper dump truck claims the title of the world’s largest EV and may sure be the readiest. It has just sprung into operation in a quarry in Péry in the Bernese Jura and is a joint development by Swiss universities and Empa.

Empa’s scientific partners were namely the Bern University of Applied Sciences BFH and the NTB Interstaatliche Hochschule für Technik Buchs. Together they realised the electric dump truck dubbed Lynx, which weighs 58 tons empty before it takes on a payload of 65 tons. The battery weighs 4.5 tons alone and reportedly holds no less than 700 kWh.

Development took the partners 18 months and the eDumper will now continue to work with zero emissions on the quarry in Switzerland. There the eDumper will carry more than 300,000 tons of rock per year over the next 10 years.

As the eDumper will transport its freight on a short stretch up and down the hill, it is expected to become a “zero energy vehicle”, meaning its charge is generated through recuperation. The eDumper will transport lime and marl rocks from a higher mining area to a lower processing plant and the partners estimate that the fully loaded descent will generate a load of braking energy, largely sufficient for the empty return journey uphill. 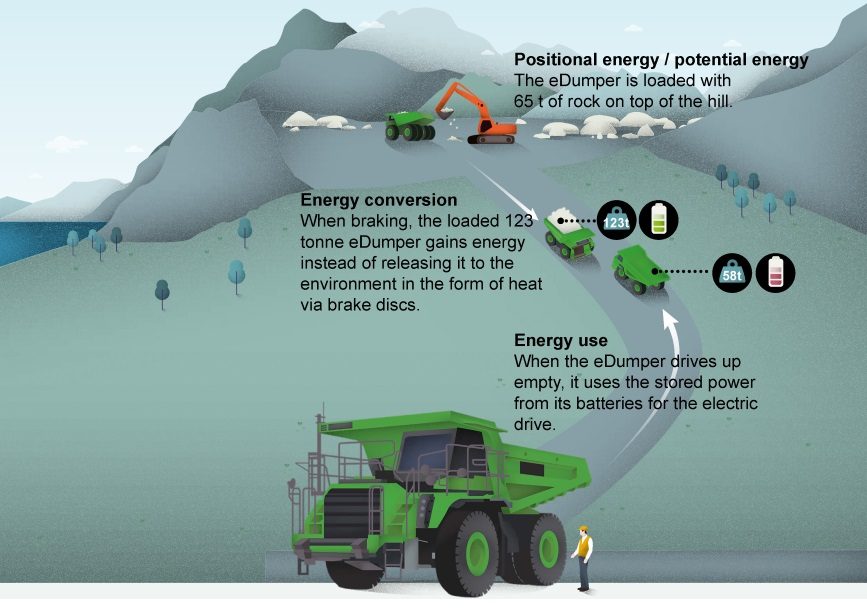 The eDumper was rebuilt on the basis of a Komatsu HD 605-7 dump truck. In order to optimally size the electric drive, researchers at the Bern University of Applied Sciences at the Institute for Energy and Mobility Research IEM equipped the conventional model with a variety of sensors so that numerous measurement data could be obtained.

The BFH Energy Storage Research Centre then dealt with the evaluation of suitable battery cells and the cooling of a battery module.

In order to guarantee the longevity and robustness of the technology, the Interstate University of Applied Sciences Buchs investigated the vibrations of the diesel dump truck in real use and the heat emission of the battery cells of the future eDumper. This research team also designed the thermal management for the battery pack, calculated the necessary strength of the battery holders and the design of the welding seams. It is also responsible for monitoring the eDumper battery in real use.

To ensure the fire safety of such a large battery cell, the Swiss Federal Laboratories for Materials Science and Technology Empa examined the behavior of the Li-Ion cells used in the event of a short circuit or mechanical damage. Never before has a land vehicle been equipped with such a huge battery pack. The eDumper is now designed in such a way that a failing cell cannot affect neighbouring cells.