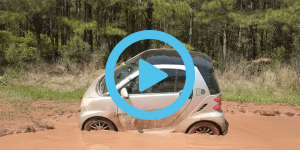 Tired of congested city streets, Kyle Conner tried to reverse the SUV trend and took an urbanite out to the countryside and definitely through its paces. Who would have though that an electric Smart could be so much fun off-road?!

Conner spares the Smart ED nothing as he runs it trough streams – more a puddle than wild waters but deep enough for the compact EV – or slides over dirt roads in the dark. In short, he does everything you’d expect to see in a Land Rover advert.

Why? Well, to see how much fun you can have with an electric smart car, says the video. Loads from what it looks like. There is no sequel but if there was one it would probably be called “how much money do you need to repair a battered smart car?”