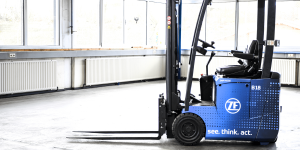 The automobile supplier ZF has presented a fully networked forklift at the Hannover trade fair with an electric propulsion system and highly automated driving functions, which scans its environment via camera and radar systems.

A cloud-based, dynamic fleet management system allows the instant processing of data and the driving of the individual forklifts. The system takes factors such as the battery capacity and charge into account, and plans charging times where the forklift automatically approaches the charging station. The AI software that is being used has already proven itself with use in tractors and commercial vehicles, according to the manufacturer.

The robot forklifts have a loading capacity of up to 3.5 tonnes, slowly pushing into the more diesel-motor dominated field. Particularly in outdoor use, combustion motors are far more prevalent in the industry. The energy management system of this forklift however, is reportedly so optimized, that one battery charge would cover at least one entire shift, according to their press statement.

“We are already playing a leading role when it comes to highly automated and autonomous driving – and that also includes industrial technology. It is no longer just about launching outstanding solutions that offer customers major benefits on the market. It’s about speed,” said  ZF CEO Wolf-Henning Scheider. The company is bundling its capacities in the ZF Innovation Forklift.

In February, ZF announced their intention to start a joint venture with the Chinese forklift producer Anhui Heli. The JV ZF-Heli Drivetech would then focus on hydrodynamic and electrically propelled forklifts with a large product variety for the Chinese market.