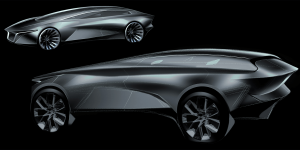 Following the recent decision to turn Lagonda into a fully developed EV brand, Aston Martin now has officially declared their first vehicle model to be an electric luxury SUV, based on the Lagonda Vision Concept from Geneva. The first teaser was also subsequently released.

After the new corporate designation and concept car presentation at this year’s Geneva Motor Show, the Lagonda team has been busy further developing their vehicle. The initial statement had been that the first Lagonda EV would be a luxury sedan, with solid-state batteries incorporated into the floor. Now Aston Martin has changed their decision and will be releasing the Lagonda SUV as the first Lagonda product in 2021, putting the new vehicle on the same time-plan as before.

“The Lagonda SUV will retain the boldness of the Vision Concept”, said Aston Martin EVP and Chief Creative Officer, Marek Reichman. “Lagonda is a luxury brand, but it is also one rooted in technology. It will be like no other SUV to drive, so its looks have to reflect that new reality…” The technical specifications have not been very forthcoming, apart from the confirmation that the vehicle will have a battery electric powertrain and offer four-wheel drive, but the design teaser does provide some insight into what the vehicle will look like, at least.

Tesla is gearing up for AWD and Performance Model 3