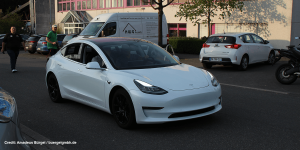 Tesla got news with Elon Musk tweeting to announce the opening of order books for the Model 3 with two electric motors for the all-wheel drive. Meanwhile, the first Canadians will receive their economy Tesla while their chief engineer is taking a time out.

Despite Tesla still being busy with ramping up its manufacturing capability for the Model 3, Elon Musk tweeted that orders will open next week for people to reserve a stronger Model 3. The new options go together with the release of specs of the dual motor and performance versions of the Model 3 next week naturally.

For now, the EV maker is still making the “standard” Model 3 in an attempt to limit options to streamline production. Hence Tesla will not start producing the AWD or performance variant before July. The Tesla CEO thus confirmed his earlier tweet that had announced the same timeline for production.

Back in Fremont, Doug Field, Tesla’s senior vice president of engineering, is stepping away from the company for several weeks. The Wall Street Journal quotes an unnamed source describing it as a “six-week sabbatical,” and Tesla declined to say when their chief engineer would come back. A Tesla spokes person commented: “Doug is just taking some time off to recharge and spend time with his family. He has not left Tesla.”

Musk had poached Field from Apple and the engineer also held leading roles at Ford and Segway. Despite his qualification, the Tesla CEO had reclaimed control over production earlier this year though, saying they had added too much automation too soon but without criticising Field directly. Since then, Musk had held the production lines at Fremont a few times with another stop being imminent. Musk explained though that these halts are necessary for Tesla to reach their initial production targets. Another set of such upgrades is to start later this month in order to “unlock production capacity of 6000 Model 3 vehicles per week by the end of June,” the Tesla CEO wrote in an email (we reported).