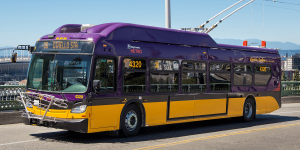 The San Francisco Municipal Transportation Agency (SFMTA) has announced their plan to transition their over 800 strong bus fleet to all-electric vehicles. The switch shall be complete by 2035 but measures are underway already and include trolley and hybrid buses.

Starting in 2025 every new bus entering the SFTMA service must be electric. The full electrification will also hit the town’s various trolley and even existing hybrid buses operated by Muni, which will be gradually replaced with all-electric models.

While campaigners would like to see complete electrification even sooner, San Francisco is in a particular situation due to its challenging topography with steep hills. At the same time, the city has already introduced a number of measures like said trolley buses that run on overhead wires electrically for most of the way and the power comes from green energy supplied by Hetch Hetchy.

Still Cheryl Brinkman, Chairman of the SFMTA Board of Directors says they were “excited about the possibility that by 2035 we will be able to provide an all-electric fleet that won’t require overhead wires”.

The SFMTA has already been rolling out new electric hybrid buses with larger batteries on board. This will allow the SFMTA to run a test programme with designated “Green Zones” along routes in which the hybrid buses would run on electricity alone. The SFMTA is currently in the process of identifying these zones throughout the city.

However, all-electric buses are still only to go on trial so to speak due to said topographic challenges but also range and availability. Believes, John Haley, SFMTA’s Transit Director: “While the battery technology is emerging rapidly, it isn’t quite ready for primetime. Manufacturers aren’t yet producing the number of all-electric buses San Francisco and other urban areas would need, nor could we guarantee that the vehicles would work for the required 15 years with heavy ridership and challenging topography.”

Still in 2019, the SFMTA intends to purchase aa few zero-emission buses and test them in service throughout San Francisco to evaluate how they perform on crowded and hilly routes. The trial also serves to see what charging infrastructure would be required.

And who knows, maybe those cable cars that need no battery will continue to prove the best electric vehicle there is for hills like those rolling in San Francisco.