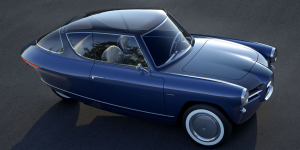 Electric transport concepts have had a drag to the retroside at times, revoking small yet beautiful designs such as the Isetta or motorcycles with side cars. But this Estonian Nobe 100 designed together with Tallinn Technical University takes things a step further.

Firstly in terms of beauty. No writer can look at it and not think “Hmmm, want!” and that effect is well intended. Says Nobe founder and CEO, Roman Mulja: “Our aim with the Nobe 100 is to create something so effortlessly stylish that you want to lick it.”

But there is more to the Nobe 100 than its looks, or taste. The company from Estonia says its design builds around the magic number 3 and so their electric trike features 3 wheels, naturally but each with an in-built motor for a sort of 3×3 AWD which is likely to make for some nimble handling.

The three seater can go as far as 220 kilometres. That is a combined range of both the large battery under the hood and a smaller one stored in the passenger compartment in form of a stylish little case. This back up pack, maybe call it the weekender of batteries, may be used to charge the main battery for an additional 40 km but otherwise supplies the onboard systems.

In terms of power, no specification is out yet although an early article by Jason Torchinsky assumed a maximum of 45 kW, or 60 horsepower, that is 20 hp from each electric motor. Nobe has now specified a top speed of about 140 kph with the Nobe 100 going from 0 – 100 in less than 6 seconds.

Those specs position this electric trike in an urban context with some intercity travel. Says Nobe founder Mulja: “We wanted to fuse together personality and conscience, not just inventing a more sustainable way to get around cities, but also making it a more exciting and charismatic experience than a petrol vehicle.”

So far, only a first prototype is out and the startup is looking for investment from crowdfunding to take it further. It is likely though that the concept will make it into production given that two motorsport outlets are behind it, namely Nobe RSMotorsport and RaceTech. Tallinn Technical University further bolsters this expertise. The minimum amount to become a crowd investor is about 122 euros.

In terms of pricing, Muljat told Cnet he estimates the Nobe 100 will be available for sale by 2020 (depending on the crowd campaign) for a price of around 30,000 euros.

And did we mention the Nobe 100 electric car is a convertible?!