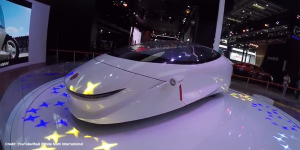 This prototype of a two-wheeled electric car balances with gyroscopic technology. And it is more than a concept as engineer Zhu Lingyun is looking for investors to start production in China. The 1703 (for now) was inspired by Ford’s Gyron but revolves around modern technology.

When Ford presented the Gyron back in 1961, their concept spawned a range of reactions but never made it into the series. However, its influence can be felt to day. Engineer Zhu Lingyun needed no more than an image to be convinced that the time had come for the concept to get serial.

He founded Beijing Lingyun Intelligent Technology in 2014 and has since been working to get a prototype going, or balancing rather. The 1705 runs on two-wheels, held upright by a gyroscope just like a Segway.

The one-seater can currently been seen zooming around a testing ground in Beijing and is entirely autonomous. Range on paper is 100 kilometres with removable batteries that can be charged at home. While the range is not impressive, it suits a city concept that is to cost no more than 16,000 dollars.

Zhu Lingyun is looking for investors at the moment in order to set up a production facility. The aim is to make between 5,000 and 10,000 units a year starting in 2020.

Tesla board to remain, China factory to come (video)