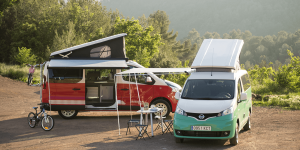 At the Madrid International Auto Show, Nissan has presented a new camper series, which is based on a retooled version of the electric transporter e-NV200. The e-NV200 camper is thus far only accessible in Spain, however.

Transforming a vehicle from a light transporter to a camper is no small feat: consequently Nissan reached for help with the redesign: the specialists BRAM Technologies joined the Japanese vehicle  manufacturer for the endeavor.

Together, the partners made a whole row of changes and modifications to the interior and exterior of the vehicle. The same 40 kWh battery pack is still included, which is also integrated in the newer e-NV200 vehicles. The price for the camper has not been announced.

Recently, the Japanese vehicle manufacturer also began their delivery of the Barcelona-manufactured e-NV200 with the 40 kWh battery packs. Since the sales start in January, Nissan has recorded 4,600 orders of the vehicles. The revamped BEV is currently being delivered to customers in Europe and Hong Kong. Japan is said to follow soon. The e-NV200 has been produced in Barcelona since 2014, and led the list of most-sold electric transporters last year with more than 18,000 sales.