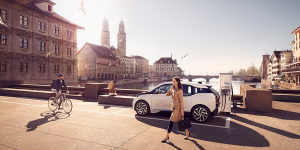 Infrastructure provider ABB has presented the capital of its home country Switzerland with 30 fast-charging stations. It is a gift on the occasion of ABB’s 30th anniversary. Once the chargers will be added, Zurich will have over 100 EV charging stations.

Swiss native ABB turns 30 years old and has presented Zurich with 30 fast-charging stations, one for each year and each worth about 30,000 CHF (about 25,000 euros). Only suitable locations still need to be found but the city says a search is already underway. The aim is to position them in central, publicly accessible locations in the city and in the surrounding area.

Once installed, Zurich’s charging network will have increased by 40 percent with a total of 106 charging station then becoming available. The charging stations are the type Terra 54 and compatible with both CCS and ChaDeMo. ABB estimates they can charge about a hundred electric vehicles a day.

Worldwide, ABB claims they have installed over 7,000 fast-charging stations.

Zurich hosted their first ePrix as part of the Formula E racing series last weekend and ABB acted as sponsor of the event. Lucas di Grassi won the race in Switzerland for Audi.