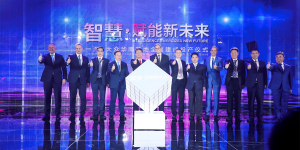 Volkswagen and its joint venture partner FAW are pressing to double their production facility in China. Their electric car production site in Foshan is currently churning out 300,000 EVs a year but it to grow into a “mega factory” with an annual capacity for over half a million units.

Once phase II of the extension will be completed, the Foshan production site’s capacity will double from 300,000 to 600,000 cars annually. For now vehicles made there utilise the MQB platform and will soon be electrified.

By 2020, the MEB architecture will be introduced, alongside the production of battery systems, which will also be located in Foshan. Models by both Audi and Volkswagen for the Chinese new energy vehicle market will then be made there.

The Foshan plant is part of a trifold push to produce (electric) cars in China together with FAW. The first factory in Qingdao was opened in May and after Foshan, Tianjin will follow in August (we reported).

The Roadmap E strategy lays out the release of 40 new locally produced NEVs in the next 7 years in China. Globally, VW prepares to deliver up to 1.5 million electric vehicles annually by 2025 that are to be produced at 16 locations around the globe reportedly. Currently VW is using three locations for the production of BEVs, and foresees to open another 9 electric car making facilities within the next two years.

Volkswagen’s electrification strategy in China is driven by toughened regulation and they are not the only one to follow suit. Transport & Environment has analysed investments of European carmakers and found that they spend 7 times more on electric car production in China than they do at home. Those numbers might be worth bearing in mind ahead of EU ministers meeting in Brussels on June, 25 to discuss the EU Commissions proposal for emission regulations that has failed so far to introduce an electric car sales quota.