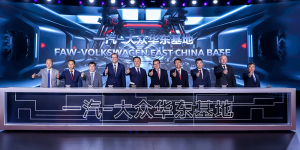 The Volkswagen corporation has opened three new EV factories in China with their partner FAW. The first factory in Qingdao was opened yesterday. The other two in Foshan and Tianjin will follow in June and August.

Volkswagen is planning to locally produce another 40 BEV and PHEV vehicle models for the Chinese market by 2025. By then, they also plan to be selling an annual 1.5 million EVs. 15 of the new vehicle models will be offered by 2020 on the new MQB platform, before the EVs of the next decade will be designed on the MEB platform. The investment sum that Volkswagen has been paying has also recently been increased, as the company announced the plan at the Beijing Motor Show to invest another 15 billion euro in EVs, autonomous driving, digitalization and new mobility services in China with their joint venture partners SAIC, FAW and JAC by 2022.

By 2022, VW also plans to start production of BEVs in at least six Chinese factories. The company has progressed a fair deal towards that goal with their partner FAW. In the factory opened yesterday, FAW and VW plan to set up the production line flexibly enough to manage production of combustion and electrified vehicles can be built on the same line. An approach, which is also shared by BMW on a large scale. Manufacturing in Qingdao has also focused on the MWB platform based Bora, among other things. The MWB platform batteries will also be produced for at the location.

In the Foshan factory, on the other hand, the main focus lies on the production of electric SUVs. The factory will also play a key role in VW’s Roadmap E, according to the manufacturer. In future, the partners aim to produce MEB platform-based EVs as well as the appropriate battery systems. In March, VW officially confirmed the plan to introduce the MEB platform to the Chinese market by 2020 with its joint venture partners.

Regarding the third factory in Tianjin, FAW-Volkswagen have only confirmed that it will help drive the SUV production forward.

FAW and Volkswagen have been jointly producing VW and Audi brand vehicles in China for some time. The FAW-Volkswagen Automotive union was founded in 1991 by Volkswagen, Audi and First Automotive Works. In November, the joint venture then went public with the intention of developing new energy vehicles in China. The name of the new brand has so far not been announced, but it is also only scheduled to begin production in the next decade. The joint venture team seems to mainly be planning to produce for the more economic vehicle sector, bringing competition for low-budget Chinese EVs.