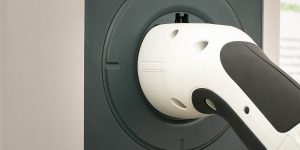 The charging station in Scotland, Orkney to be exact, has been knocked out by soft power, namely a creme egg stuffed into the charge port. As if that was not bad enough, the sticky problem persists and has caused an 800 pound damage.

The incident happened already back in April, which makes us think of one suspect in particular.

Alright, out with you, Bunny, your season is over!

Who would kick this tiny robot?

Moved by the power of song