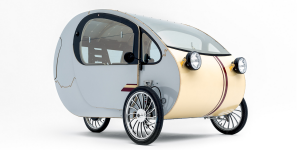 Presented exactly one year ago, Spain’s Evovelo is now ready to start producing their mö, a pedal-assist trike covered in solar panels. Their LEV is unusual but has received all required certification to run road-legally, Evovelo says.

As with the prototype, the series mö can get up to speeds of 45 kph, placing it into the realm of S-pedelecs. Configuration can be adapted though to classify as Pedelec 25 that does not require any license.

Apart from a pedal-assist drive, the mö is anything but a bicycle. Take the monocoque body that shelters up to two persons and is covered in solar panels. They recharge the Panasonic battery partially so that 1 hour of solar charge can restore 5 to 10 km of range. The battery itself holds 1,200 Wh for a range of up to 50 kilometres.

Again dependent on configuration (and regulation) the mö can drive on electric power alone or else with added pedalling power. It got five electric gears and another three mechanical gears and a belt drive.

Moreover the trike has a front crash crumple zone and side impact protection. Hydraulic brakes with EBS (ABS equivalent) and seat belts have been installed for added safety.

Steering the electric tricycle is a joystick in the centre of the cabin and mö’s compact dimensions (W 1.4m x L 2m x H 1.3m) allow for parking in urban areas. During hot weather such as you get in Evovelo’s home of Malaga, the side doors can be removed for open driving.

Sometimes it seems hard to see a market for quirky light electric vehicles such as the mö. However, its appealing appearance, cargo space in the back and stand for sustainability could make it a great choice for small businesses wanting to make an impression or sharing fleets in holiday destinations.