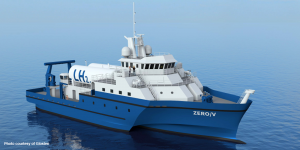 For the feasibility report, Sandia National Laboratories partnered with the Scripps Institution of Oceanography, the naval architect firm Glosten and the class society DNV GL.

Their report showed it is technically and economically feasible to build a fuel cell vessel fit for coastal research in a manner consistent with marine regulations. The project team dubbed their boat the Zero-V.

With ten racks total, the vessel has 1,800 kW of installed power. Enough for a 2,400 nautical mile range (4,444 km) at about 10 knots, translating to 14 science missions with 4 different ports of call to refill hydrogen along the US west coast.

The Zero-V uses one propulsion motor to power each of its two propellers. The team determined that 500 kW motors provide sufficient power for the various mission requirements and also have enough reserve power for safe operation in heavy seas and for dynamic positioning.

To reduce weight, the vessel has to be constructed of aluminum. The beam and length requirements were driven by the requirement that the vessel be able to dock at all primary ports of call for the vessel. 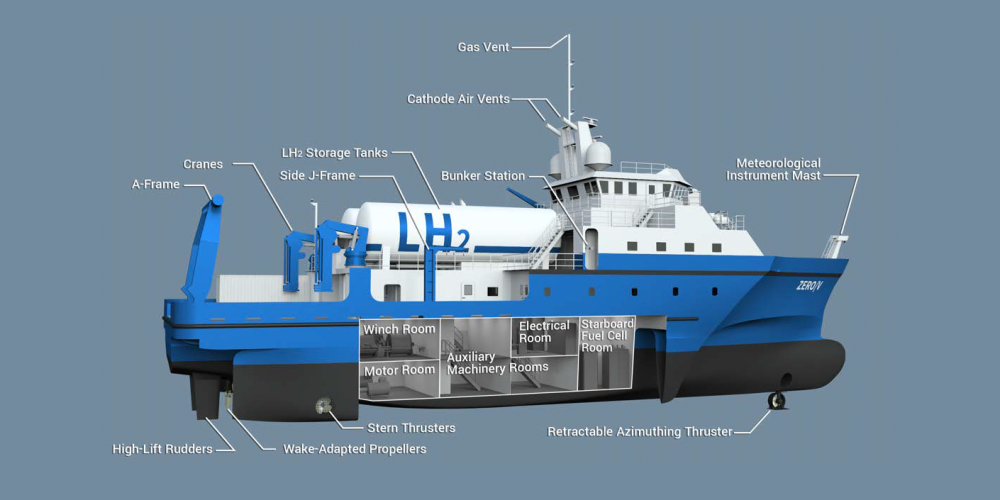 Interestingly enough, the research included a well-to-waves analysis that put the Zero V at a worse value than a diesel-driven counterpart, although only when using hydrogen generated from fossil natural gas. However “the situation is dramatically improved using renewable hydrogen,” claims the report and goes on naming Linde or Air Products as being able to provide enough clean hydrogen for the Zero V to take up operation.

In order for this to happen, the team is looking for funding and like-minded donors believing in the potential of hydrogen for marine operations. Sandia builds on experience from the SF-Breeze fuel cell ferry project.

In Europe, such efforts are well underway and being put into practice. The fuel cell system for ships by ABB and Ballard as well as Scotland’s sea-going hydrogen ferry are the most recent examples.