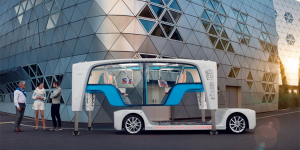 The Swiss company Rinspeed has announced the founding of their startup called Snap Motion, which will further develop their electric concept “Snap”, and produce it in a small series.

The concept is based on the idea to develop an electrically powered and autonomously driving vehicle, which could easily be adapted for different purposes. For this purpose, the concept is made with two sections: a driving platform with the electric motor and battery, which is also called skate board due to its flat design, and exchangeable cabins, called pods, which can contain anything from passenger seating to a mobile doctor’s office. Due to the ease with which the two components can be connected, the concept was given the name Snap.

According to the manufacturer, the concept was well-received at trade shows from Las Vegas to Geneva, which is why Frank M. Rinderknecht, founder and CEO of Rinspeed, is now planning a small serial production. For this a separate startup was founded with seats in Silicon Valley and Europe. The startup will not only continue the technical development, but is also tasked with developing and programming an “ecosystem”. The ecosystem will then later control the complete systematics from demand, availability, use and billing. The Silicon Valley base will work on the software aspects, while the European facility will work on the hardware.

Regarding the technical details of the Snap, so far this much has been announced: The concept has an electric motor with 50 kW performance and a top speed of 80 km/h. A 12 kWh battery allows for a range of around 100 km at the current technical standing. For a technical partner, Rinspeed has chosen ZF. The German manufacturer is delivering the core of the “skate board” with their Intelligent Dynamic Driving Chassis (IDDC).