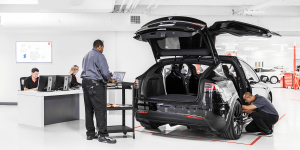 Tesla has announced a series of new initiatives to improve their service around the globe. Among other things, a new distribution centre for spare parts was opened in California, tripling the capacity for parts of North America. A similar facility is planned for Europe, as well.

Additionally, the Californians are planning to improve their global service area from 25% to 40% coverage by the end of the year, particularly in markets where customer satisfaction was found to be low. They plan to expand “aggressively” and hire additional personnel to deal with the challenge. As an example, Tesla Norway was cited, where the service team has already grown by 30% compared to last year, and the opening of a new service centre is planned.  It was reported that customer complaints rained hard on Tesla and customers had to wait up to several months for support from service centres.

Furthermore, Tesla announced a plan to set up a small network of chassis workshop in selected markets. This will test whether small repairs can be done closer to locations, and will evaluate whether this type of customer support works and could be expanded.

At the same time, Tesla has bid a few of their suppliers to repay a part of their already made payments in order to help the company become more cost-effective. This revelation came from an announcement sent by Tesla to suppliers.

At the start of the month, Tesla wrote to their north American customers asking for the final payment of 2,500 dollars following the 1,000 dollar pre-payment, before their vehicle will be finished. This is likely also part of Tesla’s ambitious goal to become profitable within a short time. At the same time, there are also multiple reports regarding tense working conditions at the company who are assembling the vehicles.

Honda bringing Clarity to Japan as a plug-in hybrid