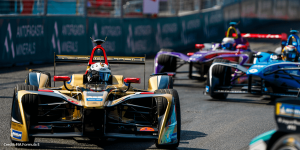 Techeetah has confirmed their partnership with DS Automobiles for the coming Formula E racing season. The team will be introduced alongside the drivers on the 1st of October. Techeetah has worked as Renault’s tech partner for two years prior.

Techeetah was only barely beat by Audi in the past fourth Formula E season in the team evaluation. With Jean-Eric Vergne the company will be starting the current driver champion on top. It is considered likely that both Vergne and Andre Lotterer will be driving in the fifth season of the Formula E, which starts in mid December.

The Virgin racing team will start as an individual team, after three years at DS Automobile’s side. A new technical partner will be introduced soon, while it is considered practically confirmed that the Brits will receive their motors from Audi in future.

In their last season together, DS Virgin Racing managed two wins and six podium placements by Sam Bird in the third season. While Bird managed to reach third place in the total rankings, his teammate Alex Lynn only reached 16th.