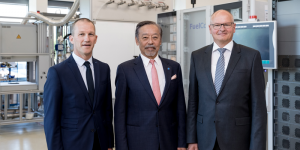 The Japanese company will be taking over the German FuelCon, which is specialised on battery and fuel cell testing. The company is based in Barleben near Magdeburg, and has specialised on building test tracks for NEVs. Several larger corporations are among their customers.

Should the deal be officially approved, FuelCon will be adding their capacities to the Horiba Automotive Test Systems, a subsidiary service provider for motor, brake and emissions testing.

Horiba vice president Dr. George Gillespie said this regarding the arrangement: “Horiba needed to find a suitable industry leader who offered a range of technical solutions that complement our existing automotive test systems business and our position of global leadership in emissions measurement. In FuelCon we have found the perfect partner.”

Mathias Bode, managing director of FuelCon added that the global outreach presented by Horiba would also help boost FuelCon’s work: “[Horiba] will give us that international reach and with their track record in the manufacture of complex test and measurement solutions, they understand our need to continue to be able to respond promptly to complex customer demands.”

Bode himself will remain in charge of FuelCon together with Ingo Benecke, albeit under the roof of Horiba in future. The 2001 founded company will continue to work independently from their current location in Germany. They will be expanded, however how many more employees beyond the current 70 will be hired has not been finalised yet.

Update 02.10.2018: Horiba has now completed the take over of the German FuelCon company, a specialist for development of testing facilities for batteries and fuel cells.