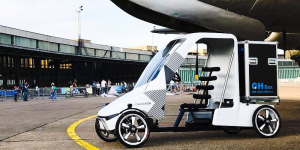 Citkar had presented its Loadster this April. The car-like electric cargo bike is fully covered but requires the driver to pedal in order to be assisted by the pedelec system by Brose.

Their new investor TEC Ventures is to enable the small company to present a near-series model at the IAA this September. Yet, the sum of the investment has not been disclosed. In a statement, TEC Venture CEO Sebastian Seitz positioned the Loadster as a solution for congested streets in cities.

Because the Loadster is classified as Pedelec25, it classifies as bicycle in Europe. This means it does not require a driver’s license and can be driven in parks or on cycle lanes. The firm is also working on a speed pedelec version with 40 kph.

The startup wants to assemble their Loadster in Berlin’s belt, that is Brandenburg. Preorders are open online and Citkar wants to begin building their cargo pedelec before the year’s end. They have now named VfJ, a workshop employing people with mental or physical challenges, as a new partner. They join the ranks of Brose and TEC Ventures, and Citkar has also managed to get Magura and Enviolo on board.

Bosch making electric drive for delivery EVs, up to 7.5t