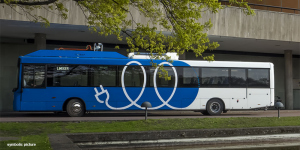 Bus maker Linkker of Finland announced a new electric bus model. The Linkker 12 LF design emphasises range with two battery chemistry options. While building on the Linkker 12 LE, the LF is lightweight with an all-alloy chassis. It also has an improved drive train.

Linkker had wanted to present the new electric bus at the InnoTrans show in Berlin initially but decided against it last minute. The Finns claims high quality standards as reasons for delaying the debut until late autumn this year.

Still details emerged ahead of the premiere of the Linkker 12 LF. The low floor electric bus will be offered with two battery options. Four in fact as both the lithium as well as the NCM version feature two capacities. The LTO packs will be made available with 60 kWh or 90 kWh. The NMC battery features 127,5 kWh or 170 kWh. Maximum range is given at 150 kilometres but Linkker claims range could reach 500 km when taking into account opportunity charging.

For this they improved the drive system called LinkDrive. It includes recuperation as well as fast-charging capabilities of the battery. The focus on range also shows in the chassis and setup of the bus. The firm calls their all-alloy construct LinkLight.

The Linkker 12 LF electric bus will be presented later in autumn this year.

The company is comparably young with only 10 years of trading. Linkker specialises in lightweight vehicle constructions and efficient drivetrains. Their electric buses can be seen in cities across Europe and as far as Moscow.