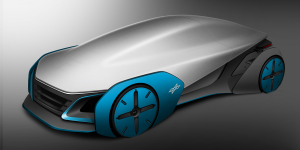 Researchers from the German centre for aviation (DLR) have created a new body concept for small size electrified vehicles as part of the project Next Generation Car.

The Safe Light Regional Vehicle (SLRV) sets itself apart from other bodies mainly through it’s weight and safety standards – the body weighs only 80 kgs, but due to it’s sandwich construction, it is particularly stable. The shape of the two-seater is also elongated to provide the least amount of air resistance.

The sandwich material is composed of a metal outer layer and a plastic foam interior, acting as crash zones. A large part of the vehicle technology is housed in the foam as well. The passenger cabin is made of a shell with an outer ring structure. According to the designers, “This absorbs the forces that act on the car while driving and should protect the occupants in the event of a crash.”

With an estimated range of 400 km, based on a compact electric drivetrain, which is supplied with energy from a fuel cell, the vehicle was designed to be a commuter and shuttle vehicle.

The Next Generation Car project has involved a total of 20 DLR institutes to jointly develop technologies for road vehicles of the generation after the next. Next to the SLRV, there are two more vehicle concepts, which also aim at the urbanisation trends: The Urban Modular Vehicle (UMV) is a modular city vehicle, as the name suggests, which aims at private and commercial use, while the Inter Urban Vehicle (IUV) is designed more for stretches between and outside of bigger urban areas.