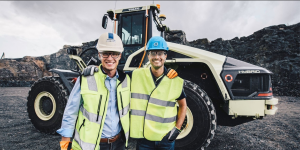 As part of a research project for electrified construction, Volvo Construction Equipment and Skanska are experimenting in a quarry near Göteborg with a variety of electrified vehicles.

The research project titled “Electric Site” has the goal to reduce CO2 emissions from the mining industry by 95%, as well as reducing operating costs by 25%. Specifically, the initiative aims to electrify all processes in the quarry from excavation and primary crushing operations to transport and secondary processing. The research team has admitted that a small dose of diesel power would still be required for the heavy lifting, however.

The concept has now reached the testing stage, after the theory has passed inspection. The project will now go for ten weeks, during which different electric and autonomous vehicles by Volvo CE will be tested. The quarry serves to provide manufacturing material as well as resources for asphalt and cement.

“This is the first time that anything like this has been attempted in the quarrying industry and, if successful, Electric Site could serve as a blueprint for transforming the efficiency, safety and environmental impact of quarries around the world,” said Gunnar Hagman, CEO of Skanska Sweden. Volvo CE president Melker Jernberg added that while the concept was not ready for the market yet, “We have learned so much already, elements of which will be fed into our future product development.”