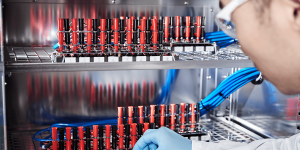 Battery research is being amped up again in Germany: The University of Bayreuth has set up their own battery research centre in Bavaria. The local government invested 25 million euro into the project.

The Bavarian council of ministers approved the set up of the Bavarian Centre for Battery Technology yesteday, after the initiative was presented by Minister for Science Marion Kiechle. The BayBatt Centre, as it will be named, is designed to research and develop intelligent, networked and sustainable battery technologies, for which they also left the possibility open to cooperate with the automobile industry. The Bavarian minister president added that the batteries would not only be designed for vehicles, but would also aim towards buildings and network infrastructure.

The first construction phase will be completed by 2020, with 114 positions being created. As of 2021, the University of Bayreuth will open a new course for bachelors and masters students titled Battery Technology and Battery System Technology, which aims to direct a steady flow of students towards the facility.